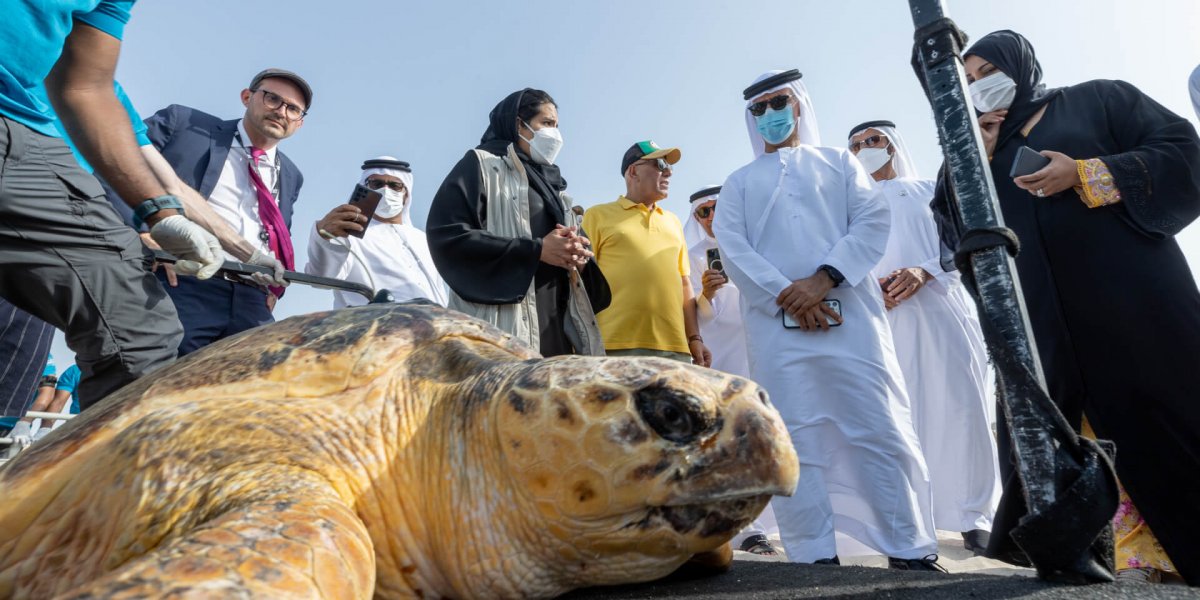 H.E. Dr. Shaikha Salem Al Dhaheri, Secretary General of the EAD, said, “We are extremely pleased with the ascending progress of the Wildlife Rescue Program thus far. Vigilant reporting of vulnerable turtles along coastlines has been a fundamental component of the project’s success and we extend our sincerest gratitude to the country’s cooperating residents and visitors alike. Our team has been excellent in discovering, rescuing, and treating vulnerable turtles that wash up on the UAE’s shores, while Saadiyat Rotana Resort & Villas has been a valued partner that has contributed to our continual efforts of ensuring local biodiversity and heritage are sustainably preserved for future generations.

With sea turtles migrating thousands of miles in their lifetime through ocean basins and high seas, the satellite tags that we have fixed to some of their shells will help us study their habits, routes, and collect measurements to monitor their overall health. These finds are valuable information that are necessary for their protection and contribute to our overarching objective of providing the finest care possible to the 5000-plus turtles that reside in Abu Dhabi’s waters.”

Since its inception, the partnership between EAD and TNA has proven to be increasingly successful. The Wildlife Rescue Program has accordingly ramped up efforts this year to protect and conserve native wildlife in the UAE’s capital. Additional manpower and the construction of state-of-the-art facilities have been commissioned to support a rising number of cold-stunned sea turtles in Abu Dhabi waters. The aim of these efforts is to streamline processes of rescue and rehabilitation for local wildlife.

Paul Hamilton, General Manager at TNA, added, Strategically collaborating with EAD has enabled the rescue, rehabilitation, and release of at least 300 turtles in back-to-back years. This not only reinforces the immense value of the Wildlife Rescue Program but also illustrates its mounting potential. Reintroducing endangered species into their natural habitats is vital to sea diversity; partnering with EAD has successfully contributed to this upkeep, which is an integral part of the UAE’s heritage and something that plays a major role in maintaining the balance of Earth.

While our early efforts with EAD have demonstrated a resounding success, our growing team and soon-to-be-completed facilities will help us save even more turtles moving forward. With that said, the continuous success of the Wildlife Rescue Program is also largely dependent on the support of the general public – we urge everyone who encounters defenceless turtles to call the Wildlife Rescue Program (800 555) and be a part of preserving the planet and its ecosystem for generations to come.”

Guests who visited TNA in 2022, have been able to see the rehab process first-hand for many of these recently released turtles. Children who were part of TNA’s Junior Marine Biology (JMB) Program, got the chance to assist in their rehab process. To continue monitoring turtles post-release for safety and research purposes, satellite tracking devices were fixed to the shells of 10 turtles (three in 2021 and seven this year).

Since signing an MoU in 2020 to establish the Wildlife Rescue Program – a mission dedicated to rescuing, rehabilitating, and releasing native wildlife in Abu Dhabi – EAD and TNA have successfully rescued more than 300 turtles over the past two years. The same team also rescued a whale shark, another animal that has been placed on the endangered list, in November 2020.