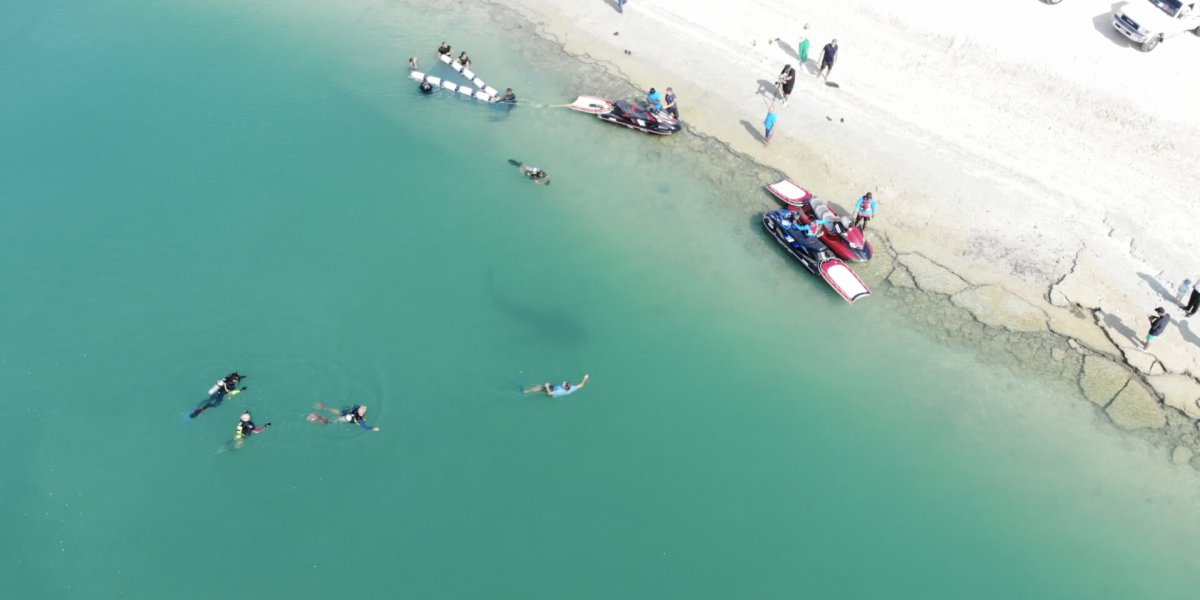 The successful joint rescue mission between The Environment Agency – Abu Dhabi (EAD) and The National Aquarium (TNA) relocate a trapped whale shark back to open sea in the Arabian Gulf. The 6m shark was noticed circling inside a man-made lagoon in the Al Bahiyah area. After close monitoring by EAD’s scientists it was clear that the animal was trapped and unable to feed or avoid unwanted human interactions.

After the assessment, the Environment Agency Abu Dhabi initiated the rescue mission, supported by the National Aquarium. team’s expertise and equipment. TNA’s team was a key component in the implementation of the rescue plan commenced by the joint effort of both teams. Using a soft plastic through-water transport bag developed specifically by The National Aquarium, the team of divers carefully captured the animal under EAD supervision. The 1st of its kind transport bag was able to move through water faster than the sharks normal swimming speed. Jet ski operators from Abu Dhabi Marine Club towed the transport bag carefully for 20km out into the Arabian Gulf whilst rescue team monitored its vital signs by staging divers along the shark’s path.

Before release, a satellite tag provided by King Fahd University in Saudi Arabia was fitted. In the 1st five days after the release, the animal travelled 232km into the Arabian Gulf which is a good indication of a healthy shark. The whale shark is now being continuously tracked as it makes its way to join other whale sharks in the Arabian Gulf migration.

Thanks to the teamwork and collaboration from the many parties involved, including Abu Dhabi Police, Abu Dhabi Maritime, Abu Dhabi Ports, Department of Municipalities and Transport , Abu Dhabi Marine, Critical Infrastructure and Coastal Protection Authority, Aldar Properties this majestic creature was saved and a new method for whale shark in water transportation was proven